Funikulì Funikulà arises in the heart of the town on Corso Umberto I, one of the main streets of the Neapolitan shopping.

Located on the third floor of an ancient building with elevator, it provides access to the disabled.

The structure is modern, innovative and avant-garde and it has 4 large bright, functional rooms. The contemporary furniture lends the room a pleasant and comfortable atmosphere.

The staff will guarantee courtesy, efficiency and availability. 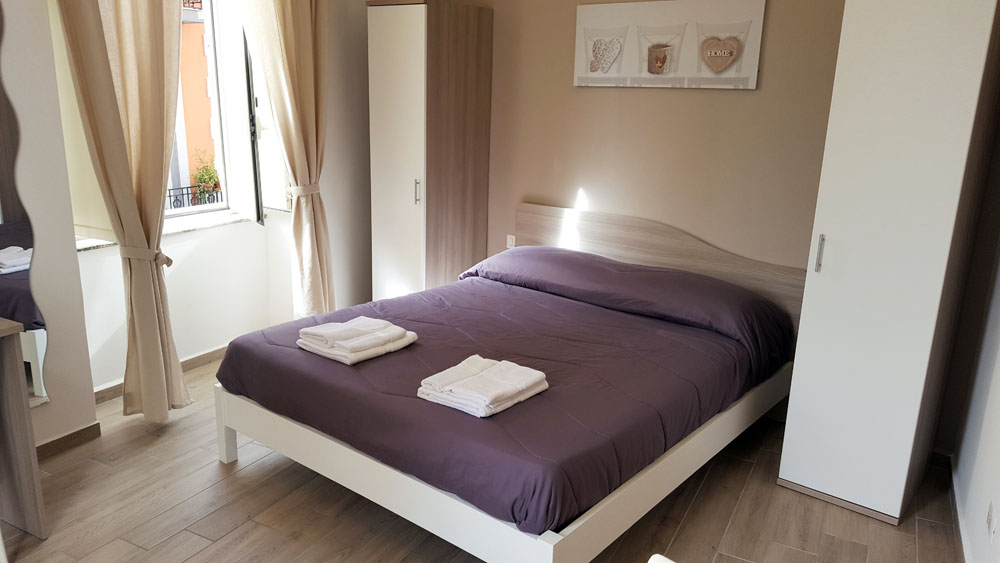 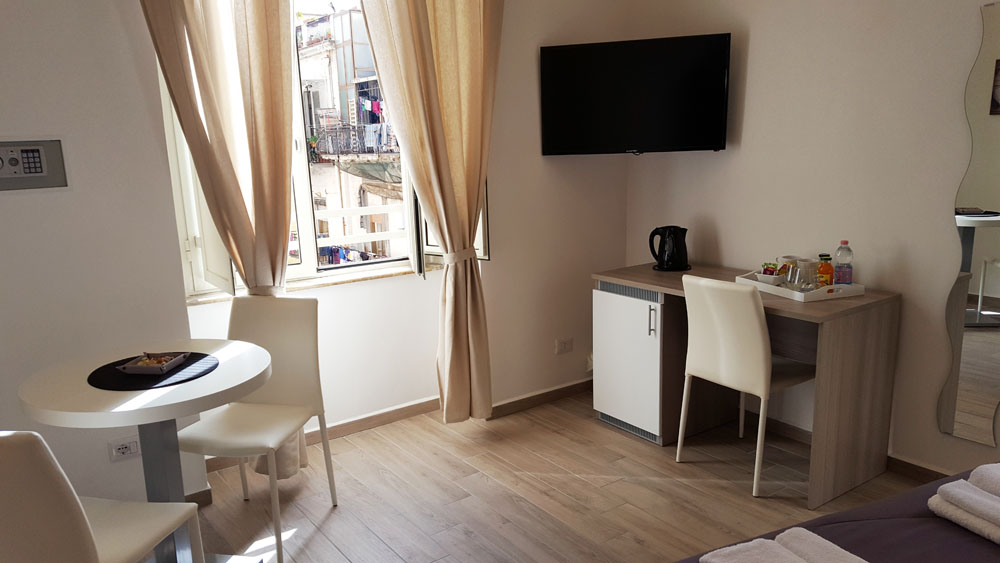 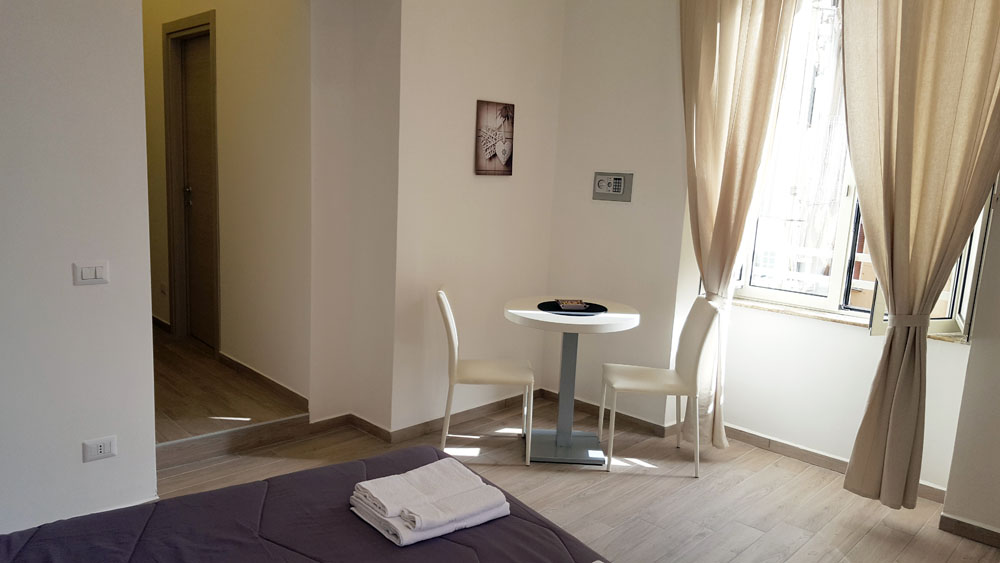 “Terra Mia” is a large and bright double bedroom, equipped with all comforts. You will have a private bathroom with shower, air conditioning, free wifi, hairdryer, kettle with tea, mini fridge, TV LED, towels. 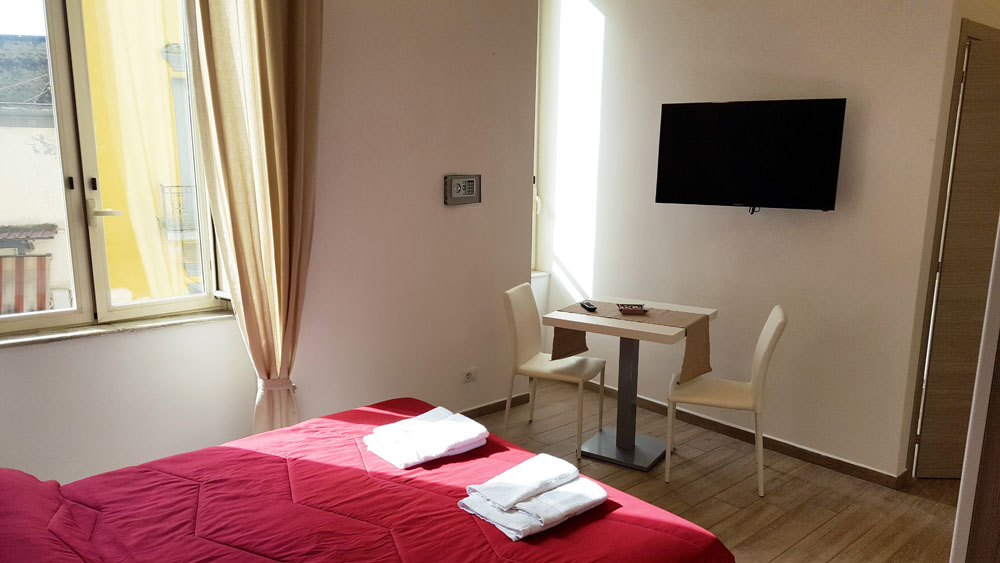 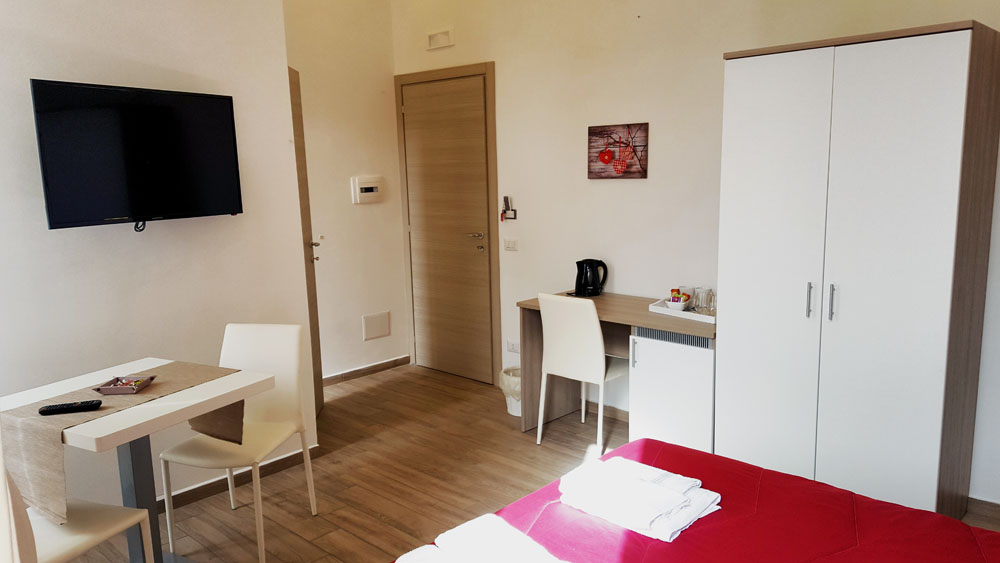 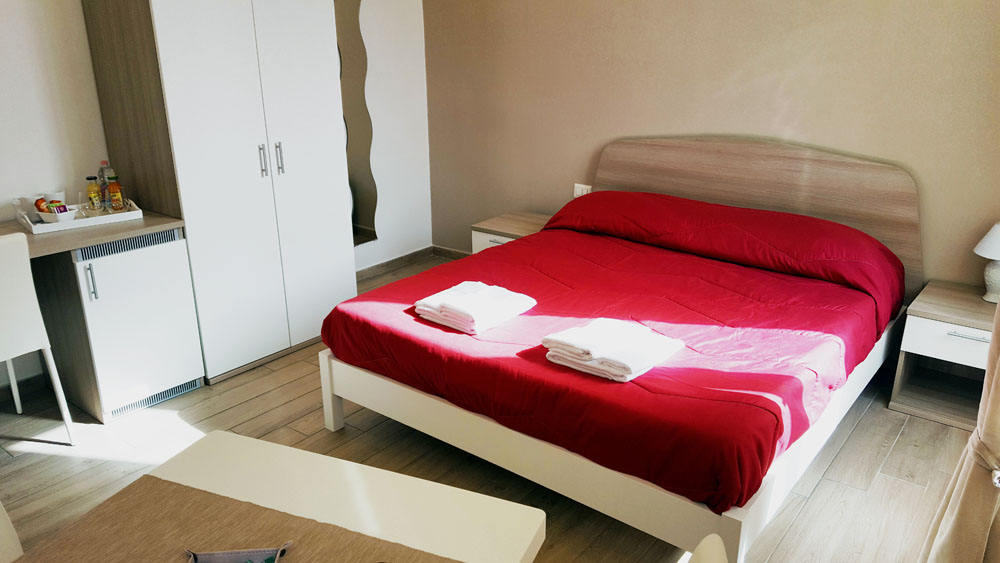 “Anema e Core” is a large and bright double bedroom, equipped with all comforts. You will have a private bathroom with shower, air conditioning, free wifi, hairdryer, kettle with tea, mini fridge, TV LED, towels. 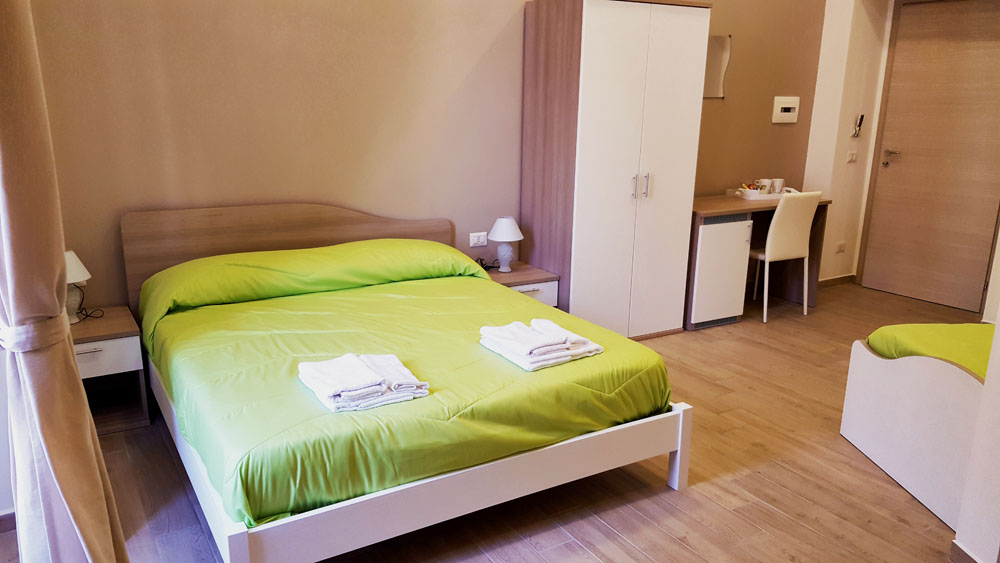 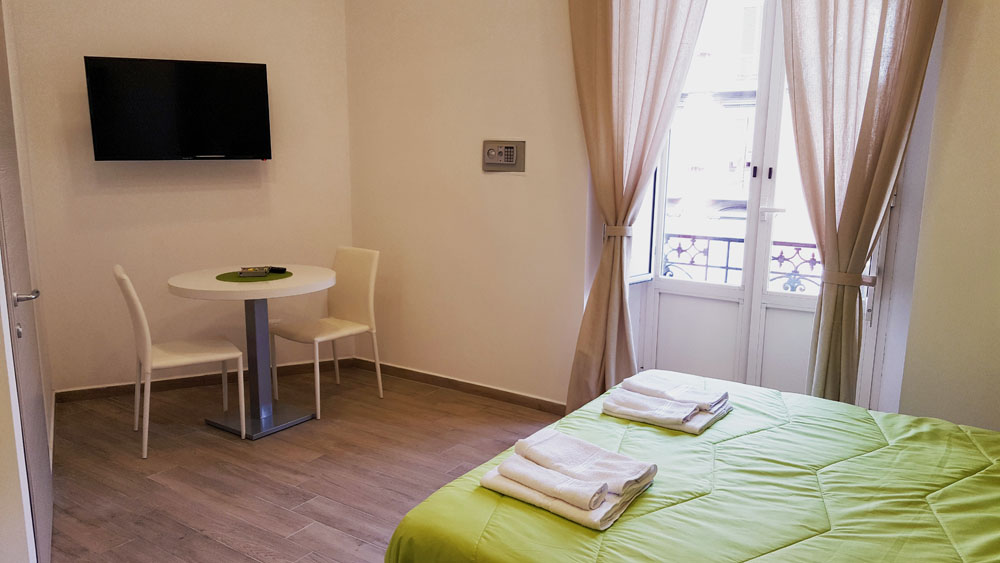 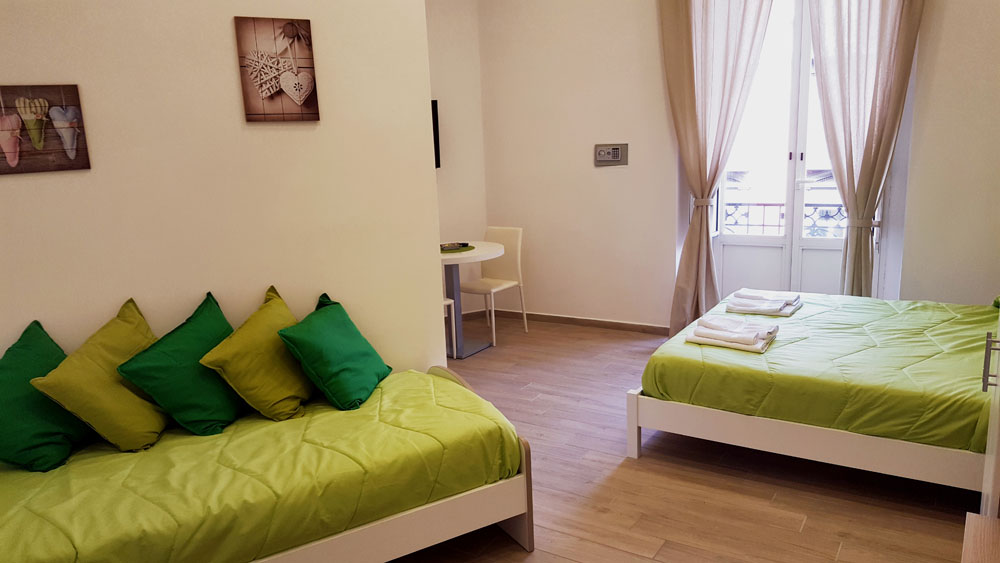 “Napul’è” is a large and bright triple room, equipped with all comforts. You will have a private bathroom suitable for the disabled, air-conditioning, free wifi, hairdryer, kettle with tea and a balcony overlooking the Corso Umberto I. 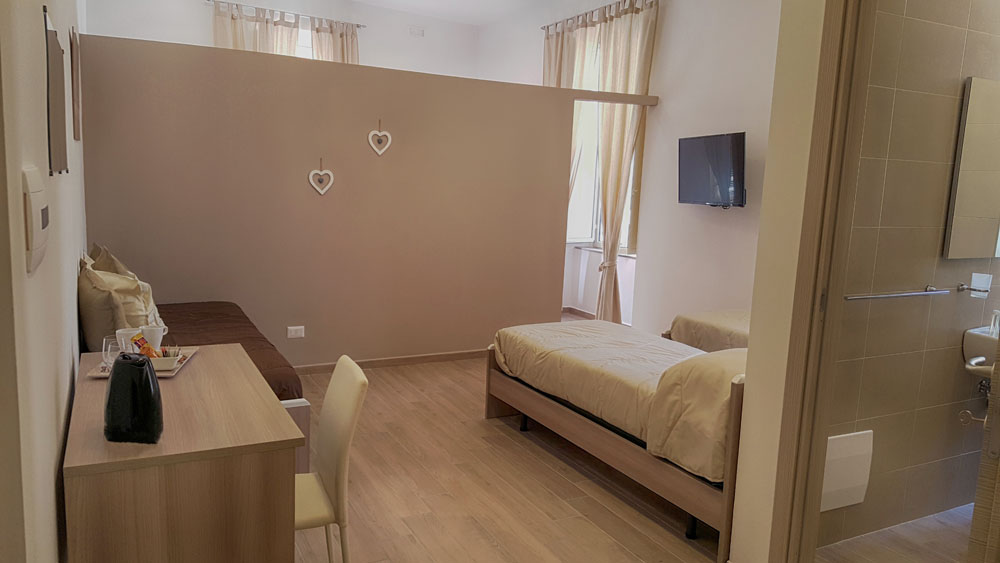 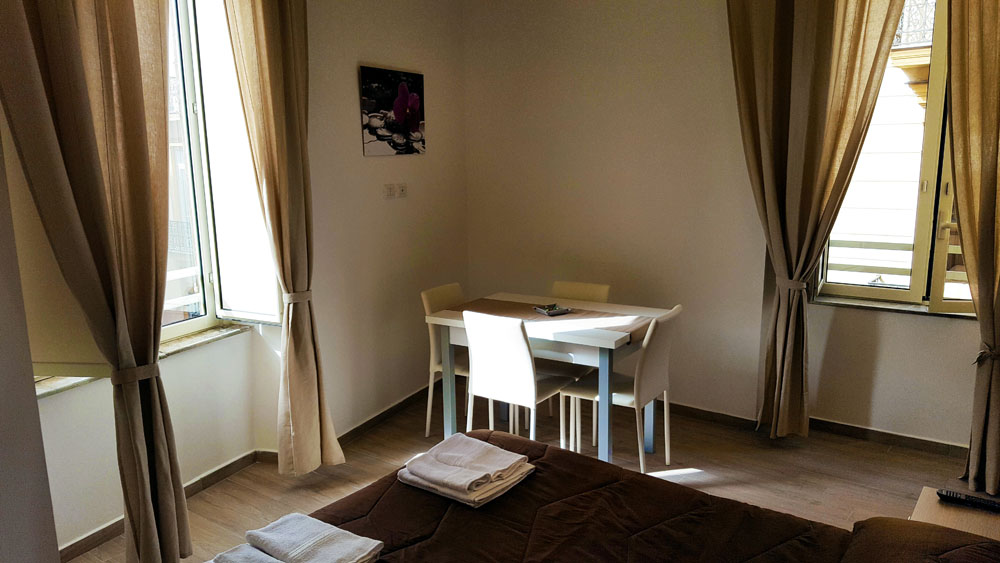 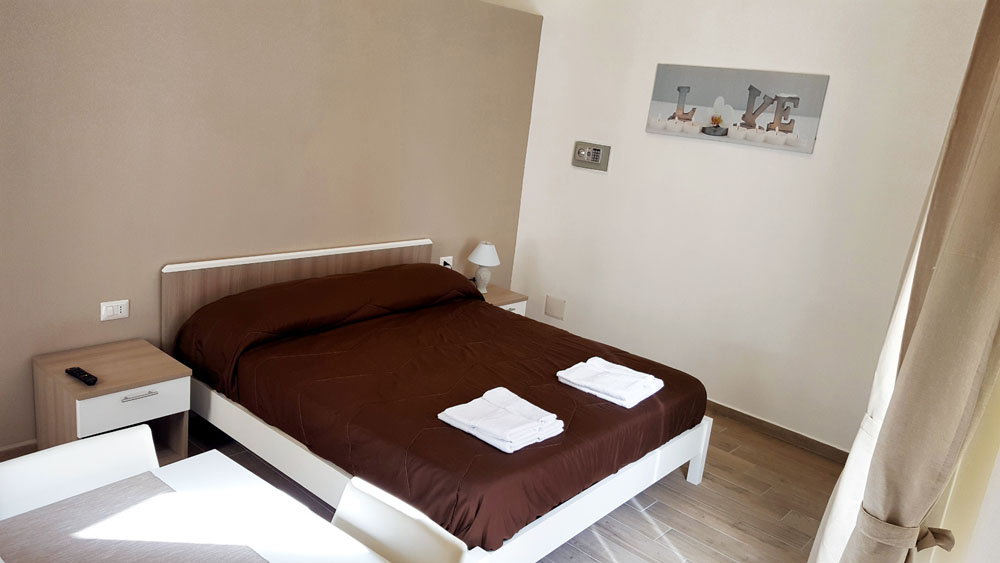 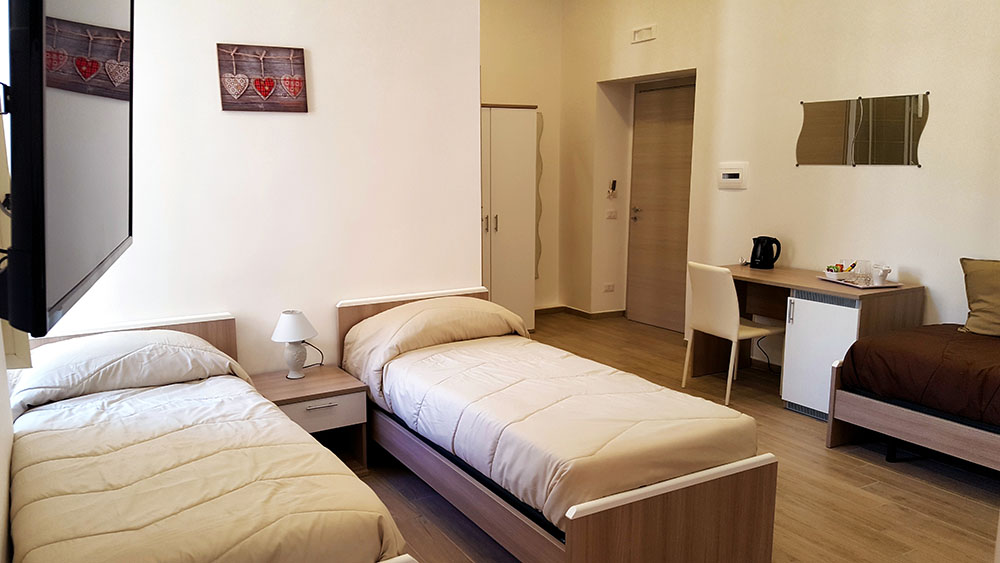 “O’ sole mio” is a large and bright quintuple room , equipped with all comforts. You will have a private bathroom with shower, air conditioning, free wifi, hairdryer, kettle, mini fridge, TV LED, towels. Suitable for families or groups of people who want to travel together.

The check-in is starting from 11.00, after telephone or email.
The check-out must be made before 10.00 am on the day of departure.

You can leave your luggage at the reception, at different times from those of check-in and check-out, after giving appropriate notice

If you stay for more than three days, the fourth day will be discounted of 10%.

From the central station Garibaldi you have simply to cross Garibaldi square following the direction Corso Umberto I and after about 7 minutes you&#39;ll be by us. From the international airport of Naples Capodichino, you have simply to get the Alibus, a bus leaving each 20 minutes from the airport. The price of the ticket is 3 euro if it is bought at the airport, it is 4 euro if bought on the bus. The Alibus will bring you at Garibaldi square.

Alternatively you can take a taxi, whose tariff is of about 16 euros.

Via Duomo, one of the main arteries of the city, home to the majestic Duomo of San Gennaro, tied to the patron saint of the city. A church rich in history and culture, home to the Chapel of the Treasure of San Gennaro, the heart of Neapolitan religious tradition, with bronze and silver statues of saints, the famous “ampoule” containing the blood of San Gennaro, which on several occasions during the year offers the miracle of liquefaction, and images of high pictorial level, made by the greatest artists of the’ 600 in Naples. A rich and complete exhibition of Baroque in Naples.

San Biagio dei Librai, famous for its shops of “cornicelli” (good luck amulets) and Pulcinella, typical of the culture, as well as of the strong Neapolitan superstition.

San Gregorio Armeno, the street of the cribs, which offers the most comprehensive showcase of pastors of the whole world. From scenes of daily life and market, religious scenes, till the most fashionable celebrities of the moment, all this is present in the refined cribs of this street.

Via dei Tribunali, the street with the most famous pizzerias in the city, where you can enjoy not only pizzas of several tastes, but you can find also typical neapolitan fried food shops and pastry shops.

Chapel of San Severo, a very rich chapel built by the Prince of San Severo, Raimondo di Sangro. It contains sculptures dedicated to the virtues of the entire family, commissioned to an architect chosen for his passion for masonry; in fact, it is supposed the Prince was an alchemist. It stands the sculpture of the Veiled Christ, sculpted by Sanmartino, who has not only carved in marble a Christ near real; he made a veil of marble which, penetrating in all joints of the body of Christ, accentuates the anatomy as if it was a real cloth towel. In fact, tradition has it that this is the result of a marbling process of a real veil, not simply a sculpture made from a block of marble.

Piazza San Domenico Maggiore, where stands the magnificent spire of San Domenico , a Saint who on several occasions, in the course of history, has replaced by importance San Gennaro.

Piazza del Gesù, where, in addition to Spire of the Immaculate Conception, lies the Church of Gesu Nuovo, an art set of 15th century, for the unusual façade with dogtooth moulding, of the 16th century, for the typical form of the Counterreformation (single and very large aisle ), and of the 17 th century, thanks to the rich baroque decorations and the paintings of the greatest artists of the period.

Piazza Bellini, where a without equal youth nightlife and open clubs for all night, mingle with history, thanks to the remains of the Greek walls of tufa, which are right at the center of this square.

Garibaldi Central Station (5 minutes walk), with a metropolitan train service, with which you can reach easily, tourist areas such as Herculaneum, Pompeii and Sorrento.

Bus stop, in front of the building.

Embarkation port (15/20 minute walk), from which you can reach the islands of Ischia, Capri and Procida.